Moonsport has proved its mettle by winning the Sports Industry Awards’ – Young Agency of the Year.

Moonsportlaunched in 2014.Originally a digital content syndication business, it’s only in the last year that it has became a fully-integrated, client service, sports business.

“It’s always great to be acknowledged especially in such a competitive industry where one needs to constantly be thinking creatively, innovating and operating differently,”says Trent Key, MD of Moonsport.

The Sport Industry Awardsare South Africa’s most prestigious awards in the field, celebrating the best work over the last year. Moonsport was a finalist in four categories; Audio-visual Content of the Year; Best Use of Social Media; Cutting Edge Sports Award and finally, Young Agency of the Year.

“All the agencies we were up against are industry leaders and the award certainly could have gone to any of them,” adds Key.

In the past year, Moonsport has captured Mark Beaumont’s record-breaking Circumnavigation by Bicyclein an international digital media campaign, constructed and operated the largest digital screen ever seen in Africa at the Cape Town Sevens, won an SAB  Media Award and worked with global federations, personalities and sports codes. From sports presentation to digital content strategy, in-stadium entertainment to video production services, content generation to activations; Moonsport has developed into a sports business of the future, filling in the cracks in the sports marketing world and tackling a diversity of work. 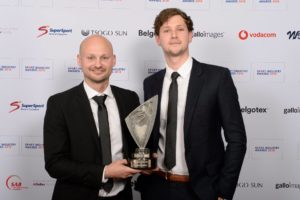 “It’s great to be on the scoreboard. It’s an exciting time for sports content and entertainment in South Africa, there are some great players and lots of opportunities for growth and development,” concludes Key.